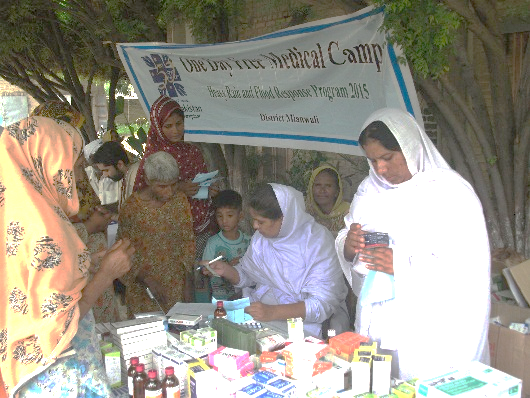 Chitral District in Khyber Pakhtunkhwa and six Districts of Punjab province have been badly hit. 300,000 people affected by the flash floods in the northern district of Chitral. Flash flooding also occurred in Districts Diamer, Astore, Gilgit, Hunza-Nagar, Ghizer and Ghanche While Chitral were declared a calamity-hit zone

In Punjab, the districts of Rajanpur, Layyah, DG Khan, Rahim Yaar Khan and Muzaffargarh inundated by floodwater, According to the details more than 500 villages in Muzaffargarh, Layyah, KehrorLallUssain and KotMithan were inundated. Embankments were collapsed in Dera Ghazi Khan while the authorities had to opened spill ways of Tarbela Dam. Crops grown on thousands of acres of land along at least 256 kilometres (kms) of the river was also destroyed. The authorities had to shut down more than 200 canals due to flood in Head Taunsa. These canals include Muzaffargarh Canal, Dera Ghazi Khan Canal and TP Link.

According to reports from PDMA Baluchistan, heavy rainfall and windstorms damaged 106 houses in Zhob, DeraBugti and Kohlu Districts. There are also reports of flooding in Barkhan, Harnai, Musakhel and KillaSaifullah Districts but so far no information of damages have been received.

Flood water receded in a months from affected areas and which highlighted leaving crops destroyed, houses damaged, water contaminated and stagnant water posing serious threats to public health issues to affected population. But right now the affectees has somehow recovered but still there are unmet needs particularly shelters and WASH sectors. The affected couldn’t really receive the compensation as government provided the portion to district government which couldn’t reached to the affected households.

The project initially was planned to be implemented in 10 districts through five diocesan units. Details of target areas per diocese are as under.

Keeping in the view the funding situation and areas affected by the floods, the project was limited to three diocesan units due to underfunded, following is the detail

RESULTS
SO 1 Food Security
Result 1.1 1200 households have access to sufficient food in flood affected areas by first quarter of the project.
Result 1.2 1000 PLW have an increased knowledge on nutrition needs of mother and child in emergencies.

The number of beneficiaries had to be revised because of underfunding of the appeal.
The methodology of distributions is the following:

Activities SO 2:
Due to stagnant water and unhygienic practices, hygiene promotion was the top priority of the program. Despite underfunding of the appeal initial targets have been reached. Hygiene kits were distributed along with food items and the same methodology was used during the distribution of hygiene kits.
Distribution of hygiene kits to 55 families was held in district Layyah on September 12, 2015.
Hygiene kits were distributed to 250 families in district Mianwali by Islamabad-Rawalpindi diocese.

Activities SO 3.
As the household items were washed away by floods, and there was dire need learned during the assessment to provide them household items in the shape of Kitchen Sets and Bedding material. Caritas Pakistan adopted the same methodology as described in the distribution of food packages. As observed,the provided household items really helped the affected families to restore their lives. Moreover, Caritas Pakistan paid particular attention to the quality of the items provided in order to make sure that they can be used for a long time.
Caritas Pakistan has provided bedding material to 100 families.
Families were selected through the same criteria used for distribution of food packages.

SO 4: Health
Result 4.1 Health care services are available and accessible to 3,500 vulnerable individuals.

Detail of medical camps is as under;

SO 5 Livelihood
Result 5.1 1000 households have sufficient quantity of fodder available for their livestock;
Result 5.2 300 flood affected farmers are able to cultivate wheat crops through adequate agri–inputs;
Result 5.3 Risk of diseases to 10,000 livestock is reduced;
Result 5.4 1,000 flood affected individuals demonstrate an increased knowledge and skills in managing livestock;
Result 5.5. 1000 individuals are enabled to preserve seed/fodder for a longer time through improved practices.

Farmers suffered due to the spread of many epidemics in the affected areas which also the effects the health of animals. Animals were having these diseases;

1500 animal were vaccinated by Caritas Pakistan Lahore diocese in district Sialkot and Narowal in collaboration with district livestock department.

SO 6 Education
Result 6. 11,400 vulnerable school children don’t drop out of school as a result of floods;
Result 6.2 10 flood affected schools can be safely accessed;

Progress Achieved;
Due to limited funded appeal this sector was not initiated.

CONTINGENCY SCENARIOS
The appeal was underfunded and therefore all targets weresignificantly reduced.

BENEFICIARY SELECTION AND INVOLVEMENT(Ref. Section 4.5 CI-MS).
Implementation of this project isin five diocesan units, Caritas Pakistan has existing in the areas through different interventions. So, field staff is very well aware of the cultural norms and behaviour of the communities which will help to select the deserving households and smooth implementation of the program with maximum participation of the communities.

Beneficiaries’ selection will be done keeping in consideration that most vulnerable and deserving households are benefited.

During the identification of the beneficiaries an initial Community Development Group (CDG) will be formed in every village/settlement. In case there is no Disaster Management Committee (DMC) exist. This group will be oriented about the selection criteria of beneficiaries, CDG and field will mutually select the beneficiaries. But overall responsibilities lies on CDG, Caritas Pakistan staff will be to there to facilitate the process and avoid any pressure or bias selection.

For the distribution of fodder it will be ensured that small farmers/households don’t have access to fodder are selected. Fodder will be selected in consultation with relevant communities.

Regular coordinating with district government at ground, more in depth communication is maintained with purpose to reach needy and avoid duplication. We are in consultation with NGOs/INGO active in the field i.e. Islamic Relief, Action aid, Malteser International, World vision and some local organization as well.Communication and coordination is continue with following

Caritas Pakistan has the capacities to plan, implement and monitor Emergency Appeals, in recent years one of the major disasters Caritas Pakistan responded to and managingEAs of more than a major scale €250,000 on regular basis. Earthquake 2005, Cyclone Yameen 2007, IDPs crisis 2009, Supper Floods 2010-2013, Drought Emergency 2014, TDPs crisis 2014.

As the flood is regular feature and Caritas Pakistan have been managing same nature of project in recent years. Thereforeorganisations didn’t requested any additional operational support, such as ERST, STEP and Facilitating Partner.

Human resources (Ref: Section 2.4 CI-MS).
Existence staff members engaged for the implementation of the project, these staff members have the experience of managing activities for the flood and heavy rain affected in the past, but considering the working environment and the cultural issues, Caritas Pakistan hired/engaged local staff for better and prompt implementation of the activities.

Logistics
Caritas Pakistan national secretariat and diocesan units utilized theexisting facilities of warehouses, vehicles and generators as well that was used duration the implementation of the project. But Caritas Pakistan also charged fuel and maintenance to this project.

Monitoring (Ref. Section 4.6 CI-MS).
The Diocesan Executive Secretary regularly visited the target areas and monitored the activities At diocesan level, and feedback from the affectees about the interventions of Caritas Pakistan was taken on fortnightly basis; suggestions and recommendations were made on ground to filed team whereas all information were regularly also be shared with national secretariat.

As Caritas Pakistan consistently reported to District government prior and after the execution of activities, district Government also conducted monitoring visit on fortnightly basis. All concerns were discussed in coordination meetings that were held at district and provincial level.

Community Development Groups (CDGs) monitored the activities on ground and also facilitated monitoring visit conducted by Caritas Pakistan or government agencies. At village level CDGs was the executing body/responsible to national Secretariat team that were also conducted meeting with CIMOs in county, local government officials and discuss the progress of Caritas Pakistan interventions.

Mock drill with Rescue 1122 in Multan