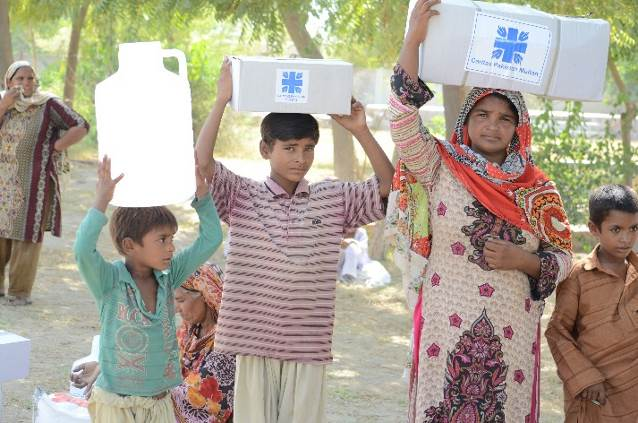 In 2014, late monsoon torrential rains (from September 3 to 7) caused flooding initially hitting Kashmir (both the India- and Pakistan-administered sides), then moving on to Gilgit-Baltistan and Punjab province. These areas witnessed heavy rainfalls because of well-marked Monsoon Low Pressure Area (MLPA), with the Rivers Jhelum, Chenab and their associated tributaries and million acres of land have been flooded.

358 people have died and about 2.2 million people have been affected, with more than half a million evacuated from the worst-hit districts of Jhang, Multan, Sargodha, Khanewal, Rahim Yar Khan and Hafizabad, among others. More than 3,000 villages in the country’s most populous province have been washed away, according to Pakistan’s National Disaster Management Authority (NDMA).

No CI support mechanism was activated

Human resources
Caritas Pakistan deployed existing and experienced human resources for the implementation of the project. An orientation session was organized for the staff covering technical sessions on needs assessments, beneficiaries selection criteria, technical guidelines for infrastructure component like installation of hand pumps, repair of latrines and shelter material, protection issues, coordination mechanisms within and outside organization and CI proposal and reporting formats and monitoring mechanism.

The following staff members were engaged in project implementation.

Logistics
Due to the adapted strategy and practices, the response remained more cost effective and saved the time and costs of travelling as well. Therefore no major inflation was experienced during the implantation period.

At diocesan level, the Diocesan Executive Secretary regularly visited the target areas and monitored the activities on ground. He also took feedback from the beneficiaries about the interventions of Caritas Pakistan, suggestions and recommendations were made on the ground to field teams and all information was shared with national secretariat.

The National Secretariat team conducted a meeting with CIMOs in county, local government officials and discussed the progress of Caritas Pakistan interventions.

The evaluation identified the following major lessons learnt from the program: