A 7.7 magnitude earthquake in HINDU KUSH REGION, at 09:09:32.70 UTC on Oct 26, 2015 struck Pakistan, including the northern areas. The epicentre of the earthquake was 269 km NE of Kabul, Afghanistan approx. 350 km from Islamabad. The tremors were felt all over Pakistan, Afghanistan and India as well.
Over 107,903 houses have been damaged, 280 people died and 1770 have been injured. Relief activities were led by government agencies and supported by humanitarian agencies. Earthquake victims were given compensation grants by the Government. Grievance Redressal Cells have been established for earthquake victims to make sure that neglected beneficiaries could voice their concerns and have access to Government assistance.
An estimated US$317 million will be required for earthquake recovery according to the UNDP Recovery and Reconstruction strategy based on consultations with PDMA, Chitral district officials and other UN agencies including UNICEF, WFP, FAO, UN Habitat, and ILO. Thematic maps were used to show the extent of damage in various sectors in earthquake affected areas of Chitral, Dir, Swat and Gilgit Baltistan, such as damage to homes, schools, roads, bridges, and water supply schemes.
The earthquake affected areas in Khyber-Pakhtunkhwa (KP) and the Federally Administered Tribal Areas remain the focus of relief efforts. The region is still affected by rain and snowfall and temperatures reach freezing points while recovery interventions have not yet started at a large scale.

GEOGRAPHICAL FOCUS
The project was implemented in district Swat, Khyber Pakhtunkhwa Province. Initially it was planned to implement it in districts Malakand and Dir as well, but in close coordination with the district government, Provincial disaster management authority (PDMA) and Pakistan Army, it was decided to implement the project in one district only in order to avoid duplication.

REPORTING ON PROGRESS AND/OR ACHIEVEMENTS
GOAL: To restore the lives of earthquake victims

STRATEGY/APPROACH:
The purpose of Rapid Response was based on the provision of relief items to earthquake victims.

For the distribution of relief packages the following methodology was adopted:

The majority of distributions took place at a common location in small clusters at village level, with the purpose to avoid any unfavourable situation. The local government administration and security agencies provided security during distributions. The local police and volunteers were deployed in every distribution.

Duplication of aid to the same beneficiaries was strictly watched through cross-checking of coupons. The same methodology was applied in all distributions.

A field office was established at the Public School (Presentation Convent) in Sangota, Swat. One Field Officer along with a locally hired Social Mobilizer stationed at the field office. Several male and female volunteers were also engaged for smooth implementation and detailed need assessment.

The first distribution was conducted on 11th November 2015. Details of target areas and number of beneficiaries are as follows: 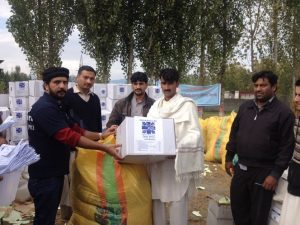 Due to the widespread destruction, two distribution spots have been set-up in consultation with the concerned officials.

The distribution was carried out on 19 November 2015 with the help of Army and district government. 100 tents and 350 relief packages (Kitchen sets, hygiene kits and winterization bedding sets) have been distributed in collaboration with the District government and Army. Affected families of UCs Gul kada, Rang Mala, Saidu Shareef, Aman kot / Faizabad, Landikas / Malakra and Malakabad of District Swat, received the relief assistance.

As agreed, the acknowledgement list of beneficiaries was shared government authorities with purpose to avoid duplication.

Details of the target areas and number of beneficiaries are provided below:

Staff orientation:
Two training sessions were organized for staffs and volunteers on the code of conduct and on DRR/ integration of basic preparedness concepts even in the response phase. The same knowledge was transferred to Community Development Groups (CDGs) and further to beneficiaries during meetings and sessions. Government officials and local representatives were also oriented about the need for and basic concepts of preparedness.

Involvement of beneficiaries
The involvement of a wide range of beneficiaries in beneficiaries’ selection through Community Development Group (CDG) ensured that most vulnerable and deserving households received assistance. Caritas Pakistan has a history of working in the areas affected by recent earthquake through a wide range of different interventions. Caritas Pakistan has staff from the same areas, therefore field staff is very well aware of the cultural norms and behaviour of the communities which helped in selecting the deserving households and ensured a smooth implementation of the program with maximum participation of the communities.

Community Development Groups (CDGs) were formed in every village/settlement prior to the identification of the beneficiaries. These groups were educated about the selection criteria of beneficiaries therefore. . Caritas Pakistan staff facilitated the process without exerting any pressure on CDGs.

It was ensured that affected/deserving households were given priority:

Caritas Pakistan’s Team is in close coordination with all of the departments mentioned below and regular meetings were conducted before and after the provision of relief ;

Field Officer participated in a meeting held at DC Swat Office on 13 November 2015. UNOCHA, District Government Officials, PDMA along with other humanitarian agencies operative and / or planning to conduct relief activities in Swat participated. The main highlights of the meeting were the following:

Executive Secretary CPIR held a meeting with the AC Swat on 01 December 2015. During the meeting the relief activities of CPIR were discussed. AC Swat applauded the efforts of Caritas Pakistan and shared that there is still a huge need for relief material in the upper areas. He shared that there is eminent need of shelter reconstruction and if Caritas starts its Rehabilitation activity this component should be taken into serious consideration. AC Swat also assured the cooperation of district government.

Field officer has been in continuous coordination with District Government, Pak Army and other relevant authorities. All the distributions have been carried out in close coordination and collaboration with them.

Keeping in view the fragile security situation, Caritas Pakistan developed a security strategy in consultation with district government and field teams were informed about the security procedures.

At diocesan level Executive Secretary, Program Coordinator and Finance Manager CPIR, have monitored the activities on fortnightly basis. They were also present during most distributions. During the visits they checked the progress of work, met with the beneficiaries and other stakeholders.

During the response, all information was shared with relevant district government prior and after the execution of activities. The district Government also conducted monitoring visits on a regular basis and participated in all distributions.

Caritas Pakistan National Secretariat stationed in the field to speed up the process, to provide technical assistance, to be involved in the whole process and to monitoring the activities.

At National Secretariat level, a two person team comprising of a National Coordinator for DRR& Emergency Response and a Communication Officer conducted periodic monitoring visits to target areas and also participated in the activities of the project on a monthly basis.

The National Secretariat team also conducted meetings with CIMOs in county and local government officials to discuss the progress of Caritas Pakistan interventions.

Real Time Reflection
A real time reflection was conducted to capture the experience of those dealing with the initial part of the response at an early stage. The main findings were used in developing the rehabilitation plan. The real time reflection was carried out in a participatory way with field office staff, Assistant commissioner (AC) Mr. Ashfaq Ahmed of district Swat and Review Officer of village. Caritas Pakistan also engaged Mr. Zeeshan Waheed (Consultant in Disaster Risk Management) as an external observer for more transparent and actual findings of the exercise. All field staff, diocesan and national secretariat staffs engaged in the project have participated in the process. Diocesan Executive Secretary and Executive Director also participated in the process.

The following methodology was adopted for the real time reflection

The main findings of the real time reflection are as under:

On job training or workshops for newly hired local staff as well are required for the effectiveness of the programme.

The rapid response covered the immediate needs of earthquake victims, Caritas Pakistan has designed interventions that responded to the ongoing crisis but also have long term impact i.e. the provision of kitchen sets is beneficial for the long term as beneficiaries will not have to buy them again.

Even in a 2 months duration project, Caritas Pakistan has initiated a continuous connection with communities. Significant knowledge and skills were transferred to build resilience at community level through hygiene promotion sessions. Hygiene promotion helped communities improve the quality of lives by mitigating risks breakout of diseases in the future.

The knowledge gained by Community Development Groups (CDGs), beneficiaries and Government officials through sessions on preparedness will help communities and Government Units be better prepared for future disasters.