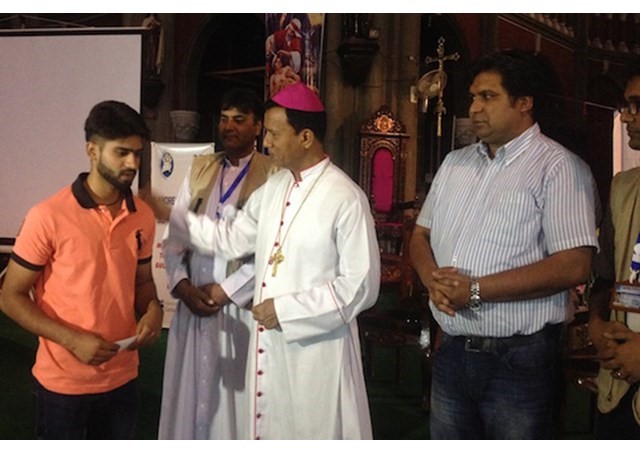 Caritas Pakistan renders financial help to victims including four who are Muslims of Easter Sunday terrorist attack.
A Caritas program was established after the suicide attack in a public park that killed more than 70 people. Archbishop Sebastian Francis Shaw of Lahore joined Caritas Pakistan in distributing checks to victims of the attack, which targeted a children’s play area in Gulshan-e-Iqbal Park in Lahore on March 27.
“It was a very painful incident, families celebrating a joyful occasion were targeted,” said Archbishop Shaw at Lahore’s Sacred Heart Cathedral, May 18 while addressing 19 families, including four who are Muslim, affected by the attack. “Our help won’t heal wounds but at least you can buy some medicine with it,” said the bishop.
The checks — worth 40,000 rupees each — were part of the Lahore blast victims support program, which was launched by Caritas Pakistan Lahore in April.
The attack death toll climbed to 78 on May 15 after another victim, a Christian woman, died in Jinnah Hospital. The bomb blast injured more than 350 people.
The Caritas program is also providing trauma counseling to those affected by the bombing and will pay at least a year’s school fees for a child who lost his or her family’s breadwinner to the bombing. The Catholic charity has plans to finance treatment for those who remain critically injured from the attack.
The Caritas project team is performing puppet shows too for women and children affected by the attack. Caritas plans to distribute more financial support to bombing victims next month.