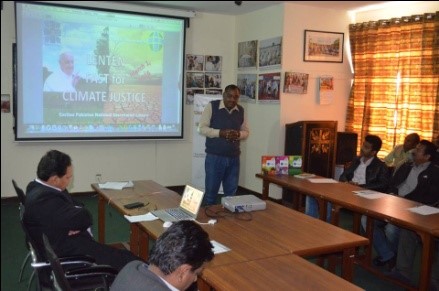 Caritas Pakistan observed Lenten Fast for Climate Justice in Pakistan on 01st March 2016 in Lahore with the collaboration of Global Catholic Climate Movement (GCCM). The main objective was to show solidarity with those who are most affected by climate change. All the staff members of Caritas Pakistan-National Secretariat participated in this event.

Mr. Estephen David Climate Change Officer facilitated all the proceedings of this event and revealed climate change scenario in Pakistan.
Mr. Amir Irfan gave introduction of The Global Catholic Climate Movement (GCCM) and briefed about climate justice and the objectives of Lenten Fast for Climate Justice by Caritas Pakistan and GCCM. He told the participants that GCCM a US based global network of partners and a climate movement is taking several initiatives like prayer and fasting in solidarity with most affected; educating about climate change; advocacy; mobilizing Catholics on an individual/community/regional level; and promoting inter-faith dialogue on climate change across the globe. Over 280 organizations from within and outside Caritas Confederation are members of GCCM. GCCM had announced 01st March the Day for Lenten Fast for Climate Justice in Pakistan and Belgium.

A video documentary about the climate change issues in Pakistan was also shown to the participants so that they may know the intensity about the issues affecting the lives of common people living in Pakistan and reflect on what can be done to mitigate effects of climate change.

All the staff members read a special prayer extracted from “Laudato Si” as a symbol of commitment towards care for creation. Taking this opportunity the participants were also briefed about Urdu version of “Laudato Si”
Later organic fertilizer was applied to the plants in the premises of national office. This showed our commitment to promote organic agriculture practices for minimizing environmental pollution.

At the end of Lenten Fast for Climate Change Mr. Amjad Gulzar Executive Director Caritas Pakistan appreciated the steps of The Global Catholic Climate Movement. He encouraged the cooperation of Caritas Pakistan with GCCM as it initiated earlier with Caritas Pakistan Karachi. Climate Change and Climate Justice are now hot issues in the world and state governments are taking some concrete steps on it. UN International Conference on Climate Change held in Paris Dec 2015 and historical agreement signed and pledges from Governments will bring fruitful results in lowering green house emissions at country level. Mr. Amjad Gulzar appreciated the efforts of Climate Change Section and other programs like Livelihood and Food Security and Disaster Risk Reduction for organizing different activities on Lenten Fast for Climate Justice in Pakistan. He expressed to have a long-term association and partnership with GCCM.