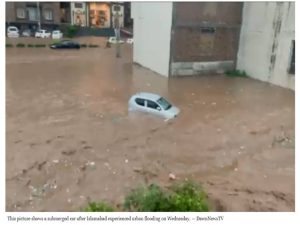 On Wednesday, July 28, 2021 capital Islamabad has experienced one of worst urban floods, several areas of the capital experienced urban flooding after a cloudburst caused heavy rainfall. A mother and her son were killed in Islamabad in basement after water enters while they were sleeping. As per met department both cities received 320 and 132mm of rain respectively. The heavy rains wreaked havoc in the low lying areas of both cities. The torrential rains specially put the life in misery the lives and properties of the slums of Islamabad city. It started early morning when people were sleeping and gave no time to people to react.

E-11 Sector is considered the most developed housing location in Pakistan, if that was not safe during the heavy rains then lives of poor people living in 24 kitchi basti (unplanned settlement) was unimaginably disturbed. The officials said flooding in sector E-11 was due to “poor management” of private housing schemes, adding that there was no equipment available to deal with the situation.

Weak regulatory check on housing societies by the civic agency and district administration was the cause of the tragic incident in E-11 where two people died due to urban flooding while three cars and several motorcycles were washed away.

The deputy commissioner further said the spillways of Rawal Dam were being opened as he appealed to the public to stay away from the riverbanks of Korang and Soan rivers. Additionally, Section 144 (power to issue order absolute at once in urgent cases of nuisance or apprehended danger) was imposed on bathing in rivers, the DC said, adding that rescue and management teams were present to handle the situation. 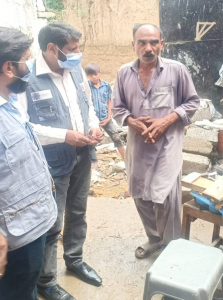 According to a survivor “We were sleeping when the rain started at 5.30 a.m in the morning, initially it was slow but within no time it got heavy. Dilawer Masih resident of Hansa Colony G-8 told the visiting team of Caritas Pakistan Islamabad-Rawalpindi. Their house is built on a nullah which always is under great threat in the monsoon. We heard a noise and a large piece of mud collapsed and fell in the nullah, choking it and the water gushed in our house. “Our neighbors and few other families of our Nuhalla rushed to rescue us, the water level arose immediately and it was as high as 7 feet. We hurried to save ourselves and I managed to save my family of 6 people (2 daughters and 2 sons). Mr. Dilawar said that they have no idea or warning about the heavy rains and possible floods.”

More warning and alerts have been issued by the concerned authorities; The Tarbela Dam administration has warned that around 150,000 to 375,000 cusecs of water will pass through the dam. Therefore, the precautionary warnings have been issued regarding a flood likely to pass through Tarbela Dam. Because of the heavy flood, the spillways of the dam will be opened, while they will also open the auxiliary spillway tunnel number five for the first time in the season to discharge water. Tarbela Dam administration has also issued a letter to the deputy commissioner and other departments concerned to inform the citizens in this regard. According to the dam management spokesperson, the flow of water in the Indus River will fluctuate from 150,000 cusec feet to 375,000 cusec feet in the next 24 hours. The citizens of adjoining villages have been warned to avoid visiting the dam and riverbank because of rising water levels. They have been advised not to let their children or pet animals go near the water.

Government machinery were proactive and become more dynamic at the time of crises and reached in almost all flooding areas of the twin cities of Rawalpindi Islamabad, Troops from the Pakistan army also on positioned on the bank of Nalla lai and had completely eye on the situation.

Heavy machinery, cranes have been deployed and fixed in the affected areas by the Capital Development Authority, CDA for the cleaning and clearance of the flow of the Nallas surround by the Katchi basti. Assistant commissioner Islamabad visited the affected areas and monitoring the situation by himself.

Prime Minister Imran Khan took notice of the situation and cautioned citizens to take “special care” due to the heavy monsoon rains. “I have also directed all the relevant response agencies including [the] NDMA (National Disaster Management Authority) to be on high alert with ready and rapid emergency response actions.,” he tweeted.

Deputy Commissioner Islamabad attributed the flash flood with a cloudburst and urged the public to “cooperate and restrict unnecessary movements”. The deputy commissioner further said the spillways of Rawal Dam were being opened as he appealed to the public to stay away from the riverbanks of Korang and Soan rivers.

Interior Minister Sheikh Rashid said the army and other local authorities were present in the federal capital to deal with the situation. “[The] army is alert, Wasa (Water and Sanitation Agency) is alert […] the whole administration is on duty,” he said. He made those remarks in a conversation with media personnel during his visit to Leh Nullah.

Following the flooding in Islamabad, Punjab Chief Minister Usman Buzdar issued an alert due to the threat of flooding in adjoining city Rawalpindi’s Leh Nullah, and asked Rescue 1122 to “put in place all the arrangements to deal with any emergency-like situation”, reported Radio Pakistan. The state broadcaster further said that the chief minister has asked for a report to be submitted after water drainage in low-lying areas.

Caritas Pakistan team are active in the field, all alert and early warnings have been disseminated to hazard prone communities. 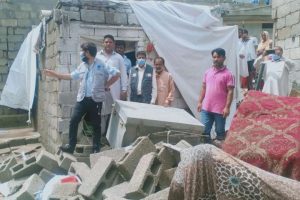 Keeping in view the situation in Islamabad, Caritas Pakistan Islamabad-Rawalpindi (CPIR) team visited the areas adjacent to Nullah Lai in Rawalpindi and different slums of Islamabad. The situation in Rawalpindi & Islamabad particularly in low laying areas is bad and many houses were affected. The team met with the effected flash flood in slums of area. The most affected areas were Hansa Colony G8, France Colony F7 and 66 Quarters, according to team approximately 2500 families were severely affected.

CPIR team conducted rapid assessment of the affected areas, the destruction of the houses and damages of the households’ evidences speaks for itself which caused by the torrential rain.

In addition to the destruction of the houses all major household items are damaged, water entered into the kitchen which made all the utensils contaminated and many items were washed away. Likewise, all bedding become unusable. Speaking to the affected families and during the assessment it has been strongly recommended to provide urgent relief, below are the needs;
• Dry Ration
• Bedding Material
• Kitchen Utensils
• Hygiene supplies

During the monsoon, Disaster Management Committee (DMCs) are playing active role in dissemination of early warning in local language to communities. They are also providing essential information received regarding preparedness for safety of lives, important documents and livestock.

Awareness session on Smog in Sheikhupura

Volunteers at Heart of Caritas Pakistan