“I joined the DRR committee to contribute for my village. Despite male domination society and cultural limitation I continued to engage with community development activities and learned technique in different sectors including particularly CBDRM activities and WASH. I also contribute my role of imparting the same knowledge and spirit to community which I learnt from Caritas Pakistan Hyderabad team. I confidently can say that I played active role in my DRR committee and this committee is functional,” she said.

Last year in 2020, her village was badly affected in the floods. The DRR committee made coping mechanism to drain out water along with the collected money and wheat from community. Six most vulnerable families were provided PKR. 6,000/- to two widows with dependent family and wheat to four families.

When the monsoon season started this year, Jemi discussed with her DRR committee to sensitize community regarding pre-monsoon safety precaution and made sure all needful measures to reduce losses during the monsoon.

“I am grateful to Caritas Pakistan Hyderabad who gave me such a platform of local committee where I got confidence in a challenging society as female. I performed my role individually and as a committee member. The community of my village recognizes my services which enhanced my dignity in village. This ultimately inspired other women who remained active in the village development work,” she said.

Homestead of Safia Bibi: A source of Livelihood

Safia Bibi, a resident of village 36/SB district Sargodha is a vegetable grower. Motivated by SAFBIN awareness and capacity building sessions on green manuring and pulses integration; farm diversification; balanced diet & nutrition, she decided to start organic vegetable farming. These capacity building sessions participated by 120 farmers from village 36/SB focused on improving soil fertility, efficient use of natural resources, pulses integration for nitrogen fixation and protein intake; and consuming differing kinds of foods in certain quantities and proportions so that the requirement for calories, proteins, minerals, vitamins and alternative nutrients is adequate.

Previously Safia’s income was less at it was only from selling of milk and his son working as farm laborer. In order to multiply her income, Safia obtained one kanal piece of land (505 square meters or 605 square yards) on lease in 2020 for vegetable cultivation. Throughout the year she produces different summer andBwinter vegetables and sells most of the vegetables in the village. She has also grown few medicinal plants in her homestead. In the recent summer season, she harvested beans, pumpkin and lady finger from her homestead. On an average she earns PKR 6000 to 7000 per month from vegetables. She also owns two buffaloes, one of them is milking and daily collects 5-6 liters of milk. She keeps 2 liters milk for domestic consumption and sells rest of the 4 liters in the village and earns PKR 8500 per month from milk. This is how she is earning her livelihood.

She has observed some positive changes regarding income, nutrition and marketing. Firstly her family maintains good health as they all consume fresh vegetables; milk and milk products. Secondly income has also increased due to sale of organic and fresh vegetables. She does not go to the local market; instead sells milk and vegetables in the village. This way she avoids role of the middleman and saves transportation cost.

Intercropping of Tobacco and garlic for income generation 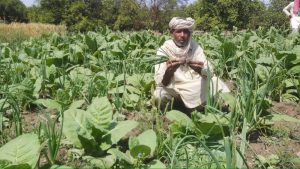 Afzal Bajwa, a small farmer from village 40/SB district Sargodha is an owner of three (03) acres of land. In this season he has grown pumpkin on one acre and jawar (fodder) on one acre. Jawar is fodder crop, which always gives good income, but other crops in the past years never earned profit for the farmer. Motivated by the sessions on crop intensification and farm diversification which were participated by 80 farmers of his village, he opted for intercropping of tobacco with garlic on 10 marla (252 square meters or 302 square yards) piece of land to generate more income and experiment pest control of tobacco. He harvested 50Kg of Tobacco earning income of PKR 35000; and 40 Kg of garlic earning income of PKR 10,000. He also realized that the densities of tobacco pests have been decreased in garlic-tobacco field.

With intercropping of Tobacco and garlic, he experienced more profit from a small piece of land; reduction of chemical fertilizers; and better management of resources. He sold tobacco and garlic in the local market. The profit earned increased access of his family to other food sources like milk, meat and fruits etc. Currently he does not have any livestock but in future he has a plan to rear livestock and expand intercropping for more yield and income generation.

Caritas’ advanced Training on Volunteer Management, “We are all Volunteers”