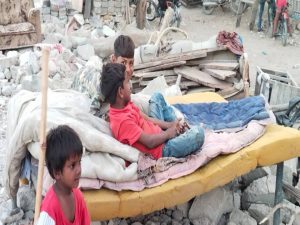 Gujjhar River or Gujjar Stream (Nala) is among the main stream of Karachi beside Orangi Stream. There are many slums on both sides of Gujar Nallah. The residents here are extremely poor and vulnerable.  In 2020 Karachi received a heavy super monsoon season. Which drowned Karachi and majority of the people were affected living at the both sides of Gujar Nala and organi Nalla.

The Sindh Government has started the anti-encroachment operation to demolish in district central only more than five thousand houses illegally built on the Gujjar Nullah, which had caused flooding in surrounding areas during the monsoon season. The plan is to widen the Gujar Nula between 35 feet and 120 feet. The width of the drain currently varies from 15 feet to 87 feet. 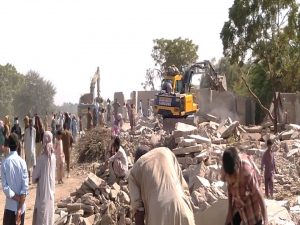 Many houses have been demolished by the Government and people are forced to leave their houses. More than 100,000 people have been affected. Due to third wave of COVID-19 in Pakistan, it is fear that these families may get infected due to lack of basic necessities required to follow the precautionary measures. 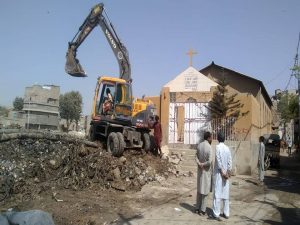 Some families were moved to rented places but fare was increased due to many people became needy of rented houses. Most of the owner started charging double due to limited places available in those location. Some families have moved to their relatives’ houses but it has created burden on already small houses became more congested. But due to COVID-19 there no jobs and they came back to their demolished houses and started living with available material. Karachi is most congested city of Pakistan and people living in a vicinity used nearby market for livelihoods.

In Jamshoro people are living on bank of canal and some were moved to land of landlord but due to cropping sowing seasons, there are asked to move. Big challenge is the monsoon. District Hyderabad, Jamshoro, Sukhur and Hyderabad have been affected, there demolished plan is different as many people have lost their shops and other buildings. But in some areas many houses have been affected. Operation is slow but ongoing and sometime it gets speed, about 1000 houses have been affected and 94 Christian families are among affectees.

Due to the order of Sindh High Court in favor of anti-encroachment operation, there is no pressure on Government to provide relief to affected families. 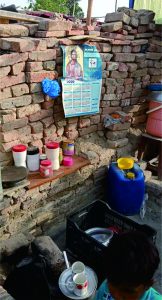 In response to the imminent risk of forced eviction and following the requests from the parishes a pre-eviction assessment was conducted by the social mobilizers of Caritas with coordination of the Pastoral team in the affecting areas located adjacent to the Gujar Nalla and Organi nalla.

The objective of this assessment was to gather information at household-level which was affected and also for better understanding of the needs of the communities at those are at risk.

The pre assessment also help for the timely responses at the time of eviction process are start in their areas and help for the advocacy for the rights of alternative accommodations.

Caritas Pakistan Karachi also builds the networking among the communities and other civil societies organizations who were involved in the affecting areas.

Caritas Pakistan Karachi & Hyderabad conducted need assessment in affected involving affected communities along with Parish Priest and committees. In Karachi need assessment was conducted by Program Officer, Social Mobilizer, Executive Secretary along with support of relevant Parish Priest. In Hyderabad, it was conducted by Program coordinator, Executive Secretary and Social Mobilizer along with Government Officials.

515 Families have been identified as most vulnerable and in dire need of urgent support. The list of selected families has been shared with Church and stakeholders.

Urgent needs of the communities;

• Livelihood support for small shop keepers in terms of material and cash will be great contribution, small enterprises, provision of rickshaw, Cash grant for families, additional livelihood opportunities,
• WASH related issues are huge and open defecation is increased in the area
• Foods is emerging is fundamental needs
• Construction support to people their houses have been partially damaged. Tents is the basic needs, as extreme summer and monsoon season is coming up.
• Kitchen set is major needs.

Awareness Rising and Door to Door Campaign to beat COVID-19