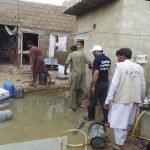 This year’s monsoon has affected urban areas instead of traditional rural flooding and puts more pressure on authorities to respond. The outbreak of Dengue in Peshawar city is also one of the main outcomes of urban floods. Major cities like Karachi, Islamabad, Rawalpindi and Lahore have been affected. The overall death toll during monsoon 2017 has raised to 177 and 166 injured and 426 houses destroyed all over the country.

Large swathes of Karachi are underwater due to a prolonged period of rainfall that started on Wednesday night 30th August, 2017 and continued through Thursday. Horrifying scenes were witnessed across the city as cars and motorcycles sank underwater and the bodies of dead animals floated through the streets. At least 40 people died; the army called in as Karachi administration is at stretched in the biggest metropolitan city of the country.

Heavy rains in the beginning of Monsoon 2017 has put authorities under huge pressure as urban settlements of metropolitan cities are most affected by heavy rains due to poor drainage systems, areas of Karachi, Lahore, Rawalpindi are affected by heavy rains. There are reports of isolated landslides in Hub, Baluchistan and northern parts of the country as well.

There has been a Dengue epidemics breakout in Peshawar city of Khyber Pakhtunkhwa Province. The emergency has been declared by provincial authorities currently responding to the needs. There is a panic situation as 3,900 patients including three doctors are diagnosed with Dengue and are under treatment at various hospitals in the province.

GOAL: To restore the lives of flood-affected communities in Pakistan

To meet food, hygiene, NFI and health care needs of 6,300 flood affected households and to increase their preparedness to urban flooding and epidemics.

Christmas food support for the poor

Tents and ration packets for rain affected in Thal desert